Being the geek that I am, I’m going to get technical for a minute, or three. This is a fundamental principle that’s known to anyone who’s done high-school physics, so I apologise for boring you in advance if this isn’t new to you.

Everything in this universe prefers to exist in a state where its energy is minimised. For instance, you’re more comfortable when you lie down as opposed to when you stand up, because lying down—among other things—reduces your “gravitational potential energy”. If you consider the following plot between your energy ‘E’ and some measure of your state ‘S’ (be it an indicator or whether you’re lying down or standing, or something more important…), 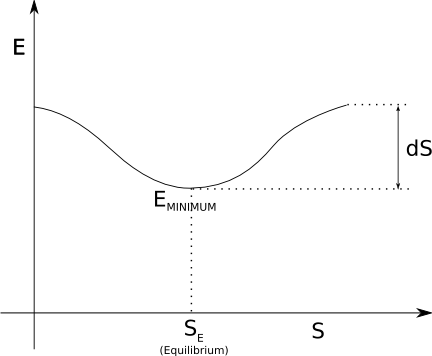 it is clear that you’re likely to exist at a state where S=SE. This is an equilibrium state, where you’re in a local energy minimum. And since you’re in this “energy well”, and you need to put in effort (dS) to get out of that well, you can exist fairly happy in this state—what’s called a stable equilibrium. i.e. Left alone, you probably won’t change very much, because after you try to change by providing energy (doing work) totalling to ‘dS’, all you get for your trouble is to end up at E=EH (some high), which isn’t even a minimum.

Think of this as actually getting up and out of bed; resulting in a state you’re less comfortable in. What’s really the point?

Like I started off saying, this measure of state, ‘S’, needn’t be something trivial, like “Is she lying down?”, but could be something more important, like “Is he single?”. In this case, the work done, ‘dS’, would be actually leaving your corner, and chatting someone up, even if it is only to get shot down and end up at E=EH again. (Again, not what you want).

But, a more thorough examination of the curve gives us the following. 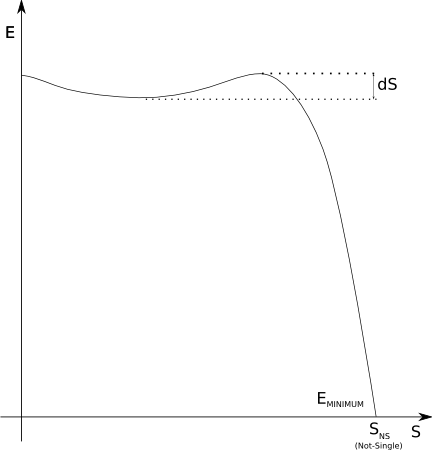 Woah! There is this huge (energetically) favourable state, E=ENS (not-single), just waiting to be attained. If only one could see the bigger picture and took the time to cross the energy barrier (dS)—which, from the totally accurate plot, is a trivial effort—much bliss awaits.

And this, is the sort of pseudo-reasoning a geek must give himself to actually go out and work toward changing his state… to one of no-longer chronic-singleness.

This is a printer-friendly version of the journal entry “Energetics, and change” from actuality.log. Visit https://emphaticallystatic.org/earlier/energetics-and-change/ to read the original entry and follow any responses to it.
« Where could the pundit be?
From reviews to life »