We’ll soon return to our (much sought after) regular “In grad school…” programming. Honest. 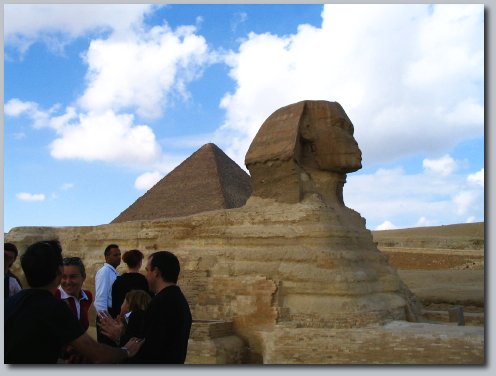 My parents just got back from Egypt. They had a splendid time and got to see and do a lot of different things, along with that cruise down the Nile they’ve always wanted. It’s gotten them so excited, my mom’s written these detailed travelogues and dad’s sent me all these pictures. Other people who’ve read these travelogues tell me what a wonderful writer my mom is (oh why did I get the wrong half of the genes?). I wouldn’t know, for I, the evil son, haven’t made the time to read them yet. Of course, it’s not like I’m busy at all, I’m just so damn lazy.

However, this post has nothing to do with any of that.

If you remember, I’m the one who convinced them to take time off and do this. I paid for all of it. I even bought them the camera that took all those pictures. I, the poor student, sacrificed things like 400 channel cable, and a rusty set of wheels, so they’d have fun. It’s all me. Me me me ME!

However, this post has nothing to do with any of that either.

When I first got into grad school, there was a good chance I’d have to spend a lot of money, at least initially, and I did. Considering exchange rates and what not, my first few months here were a dent in my parents’ life savings. Whether it was a serious dent or not is not the point, I’ve had a strong urge to just… return the sum. Since it’s obvious they won’t take a cheque, I have had to figure out various other devious ways of returning it. Enter plans for trips around the world.

But, as you might have guessed, this post has nothing to do with any of that either. As I was talking to my mom when she got back, we got into a (relatively big, by my standards) argument. That is what this post is about.

My parents are social people. They have friends — ranging from the many not-so-close to the few close ones with whom they hang out and do real stuff. More importantly, meet often, and talk. My dad knows multiple languages and various dialects, and will automatically switch to what is native to a place he’s at and always attempts (and often succeeds) to blend in with the locals. All in all, I’d say they care about/like being around a lot of people and a lot of people care about/like being around them and they just fit in to the whole social scheme of things.

Oh, horror of horrors, I, am their son. I have minimal social skills, almost no friends, no confidantes, can barely speak one language (and stammer when stressed), don’t really care about anyone (and most of the world feels the same way about me), never blend in, and always remain a rogue outside social circles. Again, it’s not like I’m antisocial, I’m asocial. I don’t hate people, I just quite enjoy doing my own thing.

Needless to say, this teeny conflict of personality types often results in fun exchanges, where each side has no idea where the other is coming from.