I am my complete lack of talent

Like I’ve been mentioning at points, I have a bunch of ideas toward a new comic series. Unfortunately, I can’t draw. I thought I could fix it by reading a little as to how the real artists and animators do it, and it turns out some of them first form a clear reference sample of all their characters in various situations (poses, emotions), and them use those as standards, as needed in the story.

Easy enough, one might naively assume. I decided to attempt an as-yet-unnamed character based on Amy in (my favourite, by far) Scary Go Round. Here is our “Amy” look-alike giving directions. 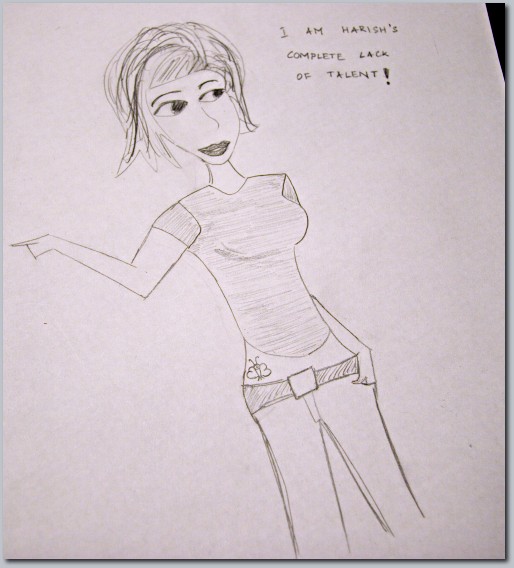 After a bunch of attempts, it is clear. I cannot draw. Notice however, strict adherence to “rules”, like the rule of thirds. The head, the torso and the legs are each a third of the total height of the character.

I am my complete lack of surprise.

This is a printer-friendly version of the journal entry “I am my complete lack of talent” from actuality.log. Visit https://emphaticallystatic.org/earlier/i-am-my-complete-lack-of-talent/ to read the original entry and follow any responses to it.
« Probably Racist
Not going to end well »