If this were reality

Oh what’s become of this journal? We haven’t delved into the world of reality TV in so long. And for those of you joining us from a parts of the world that don’t know the joys of excessive reality TV, all I can say is that I pity you.

I cannot believe that this slipped under my radar. I was channel surfing the other day, and chanced upon an episode of this little gem. 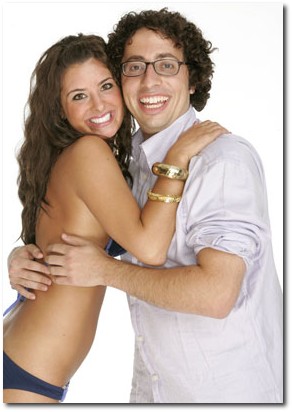 This is a show that’s either conceived or produced or just endorsed (I’m not really sure, and I don’t care) by Ashton Kutcher, and apparently, it’s already in its second season. The premise is simple enough—pair intelligent but severely socially challenged men up with gorgeous but not-so-bright women and watch the hilarity as the “best couple wins”. The guys on the show were (for the most part) your usual suspects—generally super sweet and nice engineering grad students who were beyond socially stunted. The women were extremely attractive (the photos on the website above do not do them justice), but borderline retarded. Oh joy!

What I liked about the show was that it didn’t overtly milk either of these extremely contrasting traits for cheap laughs (though I probably would have liked it even more if it did!). The guys seem genuinely in it to learn and evolve socially while trying their best, and the women are sweet, feel sorry for them and try to get them out of their shells. The interesting thing, I thought, was the general level of self-consciousness and insecurity on both sides of the fence. You’d assume a knock-out blonde hasn’t a care in the world. You’d be wrong.

Gorgeous as they were, the women on average in the show were, let’s say, bartenders. The men on the other hand were senior grad students in Ivy League schools. Now that in itself isn’t a big deal. But in every single pairing, it was the woman who felt the strong need to teach the poor guy something. You know, important life skills, like the Salsa or how to pluck your eyebrows. Not once did any of the guys sit down and go, “Hmm, there’s so much she hasn’t a clue about. Why don’t we show her a thing or two and help open up her eyes as well”.

I’m not literally suggesting rocket science tutoring for massage lessons. But I’m not not suggesting it either.

And now this brings us to our final super-general and sweeping comment that’s going to draw much fire (from you, my feisty audience, of course). Men—without thought—mate up and down the socio-economic ladder[1] as long as they find the woman “hot”. However intelligent they claim to be, the really important decisions subvert their cerebrum entirely. (As in, I’ll keep harping I need someone Ã¼ber-qualified, but if a random hot bartender chick crosses my path, I’ll be more than happy. Thoughts like, “But I might never be able to have a meaningful and deep conversation with her, ever” will not even cross my mind.)

Women, on the other hand, are intelligent enough to look into things like financial stability (as a function of education or job or whatever) when deciding a mate. Which is why they will probably only mate up the ladder given the chance; it clearly makes more sense than living destitute with a starving artist, doesn’t it? And this, is why I believe the show reversed, i.e. super hot bartender guys and socially stunted Nobel laureate women won’t work. There just won’t be an attraction either way, unless there’s someone like Miranda in the midst.

This is a printer-friendly version of the journal entry “If this were reality” from actuality.log. Visit https://emphaticallystatic.org/earlier/if-this-were-reality/ to read the original entry and follow any responses to it.
« Not in vain
Just don’t »

3 Responses to “If this were reality”