Random invitations, induced guilt and all that

Lots of odd things been going on. Firstly, I am still not ok. Not surprisingly, this “bah, who needs medication, I will autofix me” thing isn’t working. I feel horrid, cold, my eyes burn, my whole body hurts, I can’t stop coughing or sneezing, and general stuff in that direction.

I didn’t want to wake, but I had to. And quite early. Damn, ALL classes have to be held in this one HUUGE building that can fit everyone and everything. It’s not right expecting us poor weak people to travel, in the cold.

Ok, I’m done whining about my state, for now.

Over the past few days, I’ve noticed people, not always random people, who think I give a damn and attempt to guilt me into doing things for them. I don’t want to name names because, well, they might read this page and things will get all messy. And I tend to avoid rather than deal with such things.

If you have a problem, fine, you know I’ll try to help if I can. Just don’t randomly come up with some boohoo story about some thing which really doesn’t affect me and magically expect me to help. Sorry, things don’t work that way.

Similarly, coming to random people, the PETA. Come on, just ASK me to fill the questionnaire. I will. Don’t send me a mail with a nickel saying, “Ah, keep the nickel. But please fill this questionnaire or let that nickel forever remind you of the poor animal you could have helped”. Of course they didn’t word it this way, but it wasn’t far from this.

I’ve got news for you people. I haven’t wantedly caused harm or death to an animal ever. Your stupid mail just aggravates and doesn’t serve it’s purpose. I am not going to feel guilty about taking the nickel and not answering the damn questions.

Nickels, bah. What is it with coins WITHOUT numbers in this country? I have no idea how much a nickel is. And yes, I should care but I don’t. I am too tired to scream about this now. I will, in good time.

On to more random happenings. How often is it that you get invited to a movie by random people? The first time you meet? On IRC? On #gimp at irc.gimp.org?

Not normal isn’t it. But weird things do happen all the time. 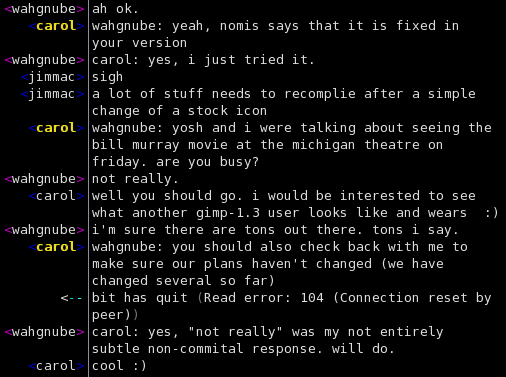 More importantly, looking at ip of this yosh person, he doesn’t seem to be like some ordinary soul. It leads to xcf.berkeley.edu. THE eXperimental Computing Facility at Berkeley. This is where the GIMP started people. Where gtk+ was born, and the reason why GNOME exists today, among other things.

This was, in my head, like the AI lab at M.I.T, in the sense of contribution to the world of extremely cool free software. These are some of the, “I have to see before I die” places. I toured around the A.I lab. I met people, spoke to and worshipped them and all that.

But not go out, in the sense of have fun. No, do you “hang out” with people you ‘revere’?

This reminded me of a conversation about ‘intellectual elitism’ which I felt was, sadly, ingrained in me, in a major way. I just realized now it works both ways, I feel, I somehow almost feel it’s not my place to be amongst the giants.

There was a lot more I wanted to say. Just feeling too weak to go on.

This is a printer-friendly version of the journal entry “Random invitations, induced guilt and all that” from actuality.log. Visit https://emphaticallystatic.org/earlier/random-invitations-induced-guilt-and-all-that/ to read the original entry and follow any responses to it.
« Hahaha
Feeling better »

2 Responses to “Random invitations, induced guilt and all that”