The only game on my playlist for the past couple of weeks has been Capcom’s Viewtiful Joe for the GameCube. Like I said yesterday, I got past one of the tougher level-bosses “Fire Leo” the previous evening, and then went on to finish the game last evening. The following is a small review.

For those in the audience with ADD — It’s challenging, but amazing fun.
You can leave now. 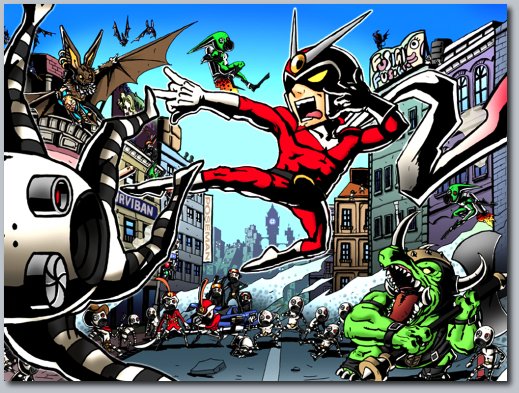 After you’ve finished gawking at how gorgeous everything looks, the first thing you realise about this game is how old school it really is. Most, if not all, of the humour in the game derives from the fact that it is basically taking some cliched/cheesy gameplay or storyline and knowingly doing the exact same thing. The creators realize they don’t have much of a story or any real plot, but make fun of that too. You do have to suspend any and all sense of reality in order to enjoy what’s going on, but you will as soon as you begin to play. The “plot” is simple enough. Evil movie characters in some sort of warped scheme to escape “moveland” end up entering the real world and kidnapping Joe’s girlfriend. In an attempt to rescue her, he enters the movie world, and with the help of an aging hero, “Captain Blue”, awakens to his true “heroness” and goes about kicking baddies until he eventually, well, rescues her.

Like I said, it isn’t much of a story.

The game itself is presented as a (2.5 D) sidescroller. I must reiterate, it is gorgeous. I don’t think I’ve ever seen a more slick, or stylish, game and they’ve used the whole cell-shading (Zelda-Windwaker like) animation technology in a totally immersive way. The whole feel is a sort of comic-book-manga meets make-fun-of-crappy-old-Japanese-movie-influenced-action-flick meets trippy colours. And they actually pull it off.

As Joe awakens to his heroness, he learns all sorts of these cool movie-like effects, called the VFX, which help him in his quests. He can slooow down time (you can easily dodge bullets), zooooom in the camera to capture his moves in glorious detail (stun baddies with your stylish moves), and speed up time (kick baddies before they even know what hit ’em). Unlike other games, which shall remained unnamed *cough* Max Payne *cough*, which use similar effects as a marketing gimmick, all these time-manipulation effects are integral to the gameplay in Viewtiful Joe. They vary from insanely helpful, to downright necessary while solving the game’s puzzles and effectively getting past bad guys. And since this is not an easy game by any stretch of the imagination, anything that helps you toward your goal is most welcome.

You know this oft-repeated sequence in Sesame Street, where Ernie hides in some random place and Big Bird searches for him? You know, the one which is basically “Elementary Pattern Recognition — 101” for few month olds? When you’re in this game, you’re doing just about the same thing, at an all new extreme level. There is almost no hope in just running into a bad guy/girl and hoping to cause any damage initially. You will get trashed, and as you’re getting trashed, you will begin to notice patterns in their behaviour, and you will figure out combos of your own moves to counter them. There is no other way. You will die, and die often.

So if there is one flaw in this otherwise awesome experience, if you can call it a flaw, it is that if you aren’t able to figure out what to do soon enough (it does happen occasionally), you keep dying, and can get frustrated with being unable to make any progress. You will keep going through the same sequence over and over (I spent an evening on “Fire Leo”) until you figure it out. All that said, it is extremely pleasing to figure things out and move along. Before you know it, you’re finished, and you’re going through sad and painful withdrawal symptoms. On a positive note, once you’re done with the game, and you sit through the credits, you get to see this neat animated music video where Joe and other characters in the movie sing and perform. That was cool, even with the music being Japanese.

This is a printer-friendly version of the journal entry “Viewtiful’s Beautiful” from actuality.log. Visit https://emphaticallystatic.org/earlier/viewtifuls-beautiful/ to read the original entry and follow any responses to it.
« I think this is it
Like a British born Indian »