Not too much to really report. Either that or too much has been going on and I’d rather not remind me. Or I’ve just been plain lazy.

No, really, nothing there to report.

Of course I could whine about a few things. Our favorite show for instance. But then again, it is turning out quite legit, because she’s kicking all the extremely arrogant model types and the extremely dorky geek types. Can’t really complain there can I. Can’t say anyone else would have really done any different. There was one thing though. But that’d be nit pickey, and only because I was rooting for the guy with glasses. Not that I was under the delusion he would ever get picked in any circumstance involving anybody else. Cruel, but such be life. Puny geeks with glasses are at a disadvantage to say the least. It is bad even if they aren’t puny. Or don’t wear their glasses.

While I am on reality shows, here’s another one that I have caught a couple of episodes of. I wanted to scream, considering this boss guy’s girlfriend looks like his grand daughter, and most of the women picked for the show were model material, AND NONE of them got fired so far. Last week, all that went away. I think a reference to this old Scary go round comic is in order. 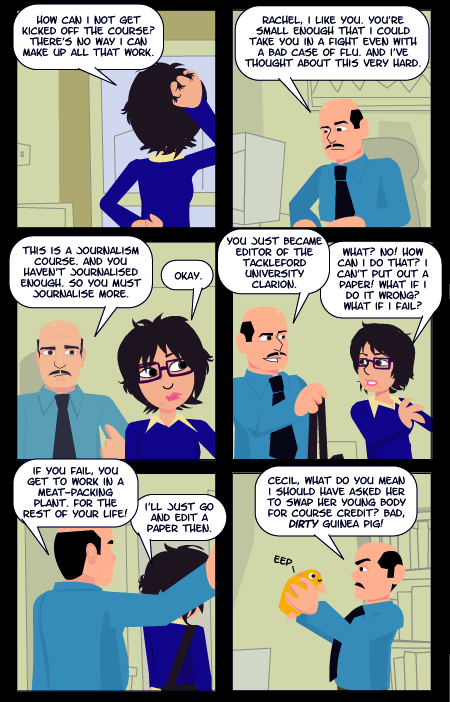 Speaking of cruel things, I don’t think I was particularly nice today to this woman on the bus. But then again, there was this need to do it. (But then again, that is just some cheap excuse to make my evilness legit.) I presume this person was from the music school, and was trying over and over to hit this sequence of notes. And obviously not being able to. I was obviously curious, and peeked into the notes. (Yes, the more obviouslys I use, the more I imagine you’ll think such behaviour as perfectly natural.) Anyway, it shocked me that I couldn’t read parts of it. That was a big deal. I haven’t seen anything of this sort in so long, I was pretty freaked out I lost it. I had to read it like I “read” Tamil. Knowing 40% of the “alphabet” and make up the words as they sound fitting if I can. Most probably misread, but that is a feature across languages, so no biggie. Anyway, listening to the attempts, some blatant confused staring, and some intelligent interpolation, I got what she was trying to sing. Fast forward in time, but this is apparently still in my head. I get off the bus where ever it is I wanted to be, and pulled off the sequence, louder and clearer than I imagined. No one has ever given me a colder glare. *Shudder*

And what is the deal with doors leading to corridors opening out into them? Needless to say I was walking close to the walls of one of the corridors when I was being me and not entirely paying attention thinking about something else. Some genius opens the door rather quickly, (and you can’t particularly blame her because IT DOES OPEN OUT RIGHT INTO PEOPLES’ PATHS) and slammed right in, nose first. It’s a good thing it was only hard wood and I have a nose made of extremely strong soft tissue.

Yes, I have strong feelings about what should be done to the designers of these buildings. Either that or karma is faster than I thought it was.

This is a printer-friendly version of the journal entry “Generic life, almost” from actuality.log. Visit https://emphaticallystatic.org/earlier/generic-life-almost/ to read the original entry and follow any responses to it.
« Back home
Muhahahahhahahah »