… words thrown out of context.

The sheer number of students involved—well over 200—ensured a wide variety in points of view, and the artificial sense of anonymity they enjoyed resulted in a degree of candidness I was surprised to see; sometimes brutally so. It’s like they’d forgotten I’ve spent a dozen or so hours with them each week, and they’re really not nameless to me. Perhaps, their extremely-alike and hard to discern handwritings,

lured them into this fictitious sense of security. Oh, the poor, misguided young’uns. And, in case you’re wondering, GSI stands for Graduate Student Instructor.

Some of the responses were verbose,

while others were more wordy still, 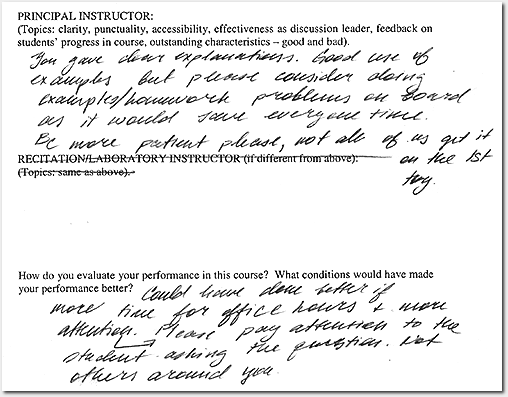 a few, extremely so,

but the verdict was clear…

Another inopportune pause. Patience is a virtue.