Like clockwork, my life over the past few years has been a steady sequence of steps leading up to the next major event. The next major intellectual hurdle, the next major trip, the next major purchase … . Not breaking the pattern, I’ve decided what I really want next: A British Racing green Mini Cooper-S. (PDF with pictures of the car, attached goodies and pricing.)

Unlike my father, I don’t enjoy recurring expenses. I really prefer paying in huge lump sums. So extreme financing whereby I pay a tiny amount initially and keep paying a sum per month for many months thereafter is not an option. I plan on saving up for it and paying for a bulk of it at the point of purchase. Since our earlier checklist worked so well, I’ve devised a more colourful scheme for announcing my progress toward the goal on this web log. Tadaaa. 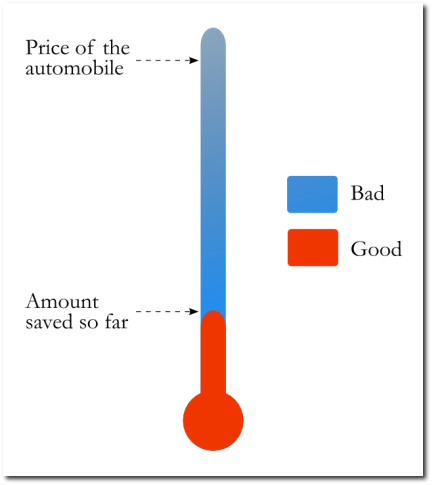 For those with negative energy in the audience, I know, sure the average grad student doesn’t want to wait eons and rather goes in for a 2nd-hand rusty bucket of bolts.

I am not your average grad student.

This is a printer-friendly version of the journal entry “Next major event” from actuality.log. Visit https://emphaticallystatic.org/earlier/next-major-event/ to read the original entry and follow any responses to it.
« Squandered Opportunities
Women issues »

5 Responses to “Next major event”