If I were a writer, I would currently be going through something of a writer’s block. But since I’m not, and I don’t really need to have particularly insightful, interesting or humorous things to talk about before I actually say something, I’ll just chalk down this recent lull to laziness. Or being busy. Or anything else that floats your boat.

It’s strange. I can, apparently only really (as in comfortably, with little effort) “write” in certain very specific environments. A particular position on my bed for instance. And now, without the ability to pay for stable internet in this new apartment, I don’t have that cozy position as an option. I tried sitting at a café (actually a place I really love to hang) near by, but I keep getting distracted by people. From a Bible study group around me yesterday, to this partying group a short while a go—the theme of said party being pimps n’ hos. I gave up and returned home.

Anyway, since the Doom 3 demo’s been out, and my machine is no where near completion, I’ve been playing it on the laptop. With insanely low graphic detail and almost all effects turned off and yet at some single digit fps. Which doesn’t really make that big a difference apparently, since the freaking thing just renders a black screen at 5 frames a second.

My review so far – The shawdowing is awesome! Only there aren’t any light sources to cast freaking shadows. 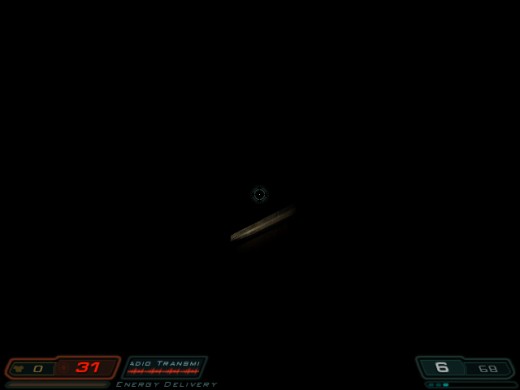 (And I didn’t, I swear, pick some arbitrarily bad spot. This is the state WITH THE “FLASHLIGHT” for crying out loud. Yes, your health would be “only 31” too if you couldn’t see shit while constantly being gunned down.)

This is a printer-friendly version of the journal entry “Slacking gamer” from actuality.log. Visit https://emphaticallystatic.org/earlier/slacking-gamer/ to read the original entry and follow any responses to it.
« Crowned Hilltop
Powdered Top »