Spending the night at a station

… after the Oasis gig. 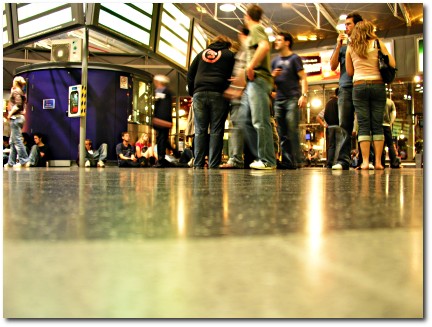 Clearly, the concert was one of the more intense experiences of my life. Like I said, I’d surprisingly easily made my way to Manchester. The concert was at this huge stadium (where football games and such usually take place), and leaving the station, I had absolutely no difficulty finding it—just followed the path littered with ticket scalpers.

I made it there by 4:30, the gates having opened by 3:00 or so. It was about 20-30% full at that time, and all sorts of no-name (and semi-named) bands were busy keeping the audience awake. The most notable ones being the Coral, who, though cool, are seriously overrated. In a little while, I met James and Stewart—a totally inappropriate story, for a later time.

Now moving along, as the no-name bands got more recognizable, crowds started filling the arena. Tens… hundred? of thousands, lost in this sea of Oasis fandom goodness. By 9 or so in the evening, it was beyond packed. 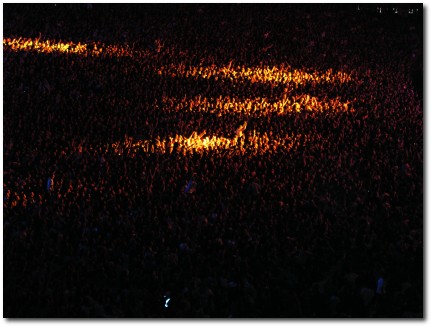 People EVERYWHERE. All (drunk and smoking) and/or (doing drugs). (You need to parse the Boolean algebra on that sentence carefully). The mood was insanely… passionate. Things started with people throwing these big colourful beach balls, then empty beer cups, then cups full of beer, then shirts, then PEOPLE.

It was intense, and Oasis hadn’t even come on yet.

<sidetrack>
I was sitting close to one of the hottest woman I’ve seen, in a figure hugging one piece dress that barely came down to her upper thigh. And it kept riding up even higher as she crossed and uncrossed her legs. Anyway, in these few hours, she’s been sitting all calm and ridiculously gorgeous, continuously drinking and smoking, while her boyfriend (?) is all over her, constantly kissing her knees and thighs in between sips of beer. And then, it happens—she pukes like 4 pints of beer and passes out. He ends up embarrassed and has to carry her out of there.

She didn’t look too pretty then. And Oasis hadn’t even come on yet.
</sidetrack>

Around 9, Oasis comes on, and the crowd goes fucking insane—and the sea of thronging fans flow toward the stage, only a steel, concrete and bouncer barricade separating them from the band. And then, it happens—the teeming masses break down the barricade and Oasis, who’d barely started playing stopped in the interest of crowd safety.

“If one of you gets injured, it’ll show up on a T-shirt on your way out.” 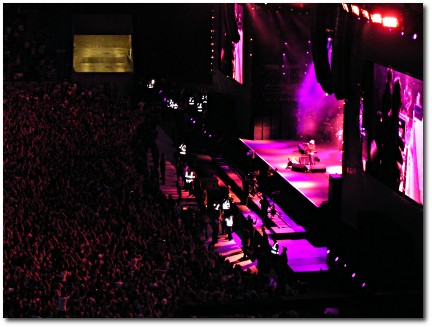 While things were paused waiting for the stewards to fix the barricade, Liam suggests the crowd keeps itself entertained by singing Oasis songs to themselves—but the crowd has other ideas. For the next half an hour, pretty women were desperately climbing anyone’s shoulder they could get on, so the camera (which was hovering over and through the crowds) would catch them, and they could flash their breasts.

This, ladies and gents, is entertainment. Half an hour of young, pretty women (and eeek, some old ones and SOME MEN) screaming hysterically and going topless.

Anyway 9:30, everything’s fixed and the band begins to play. The crowd goes to a new level of insane, me included. Jumping wildly, stripping, dancing, screaming lyrics and generally going berserk. I wouldn’t be surprised if somebody died in a stampede or two. They played many old favourites, and a few tracks from their new album “Don’t believe the truth”.

I thought it was all awesome, but an objective observer I am not.

Much later, close to midnight, they were done and as the huge-ass speakers and strobe lights calmed down, people flowed out of the stadium. I then ended back at the station (the details of which are elaborated in a separate story) to find the last train to London was long gone. I decided to, like a 1000 or other so people, camp out at the station for 8 or whatever hours until the first train next morning. 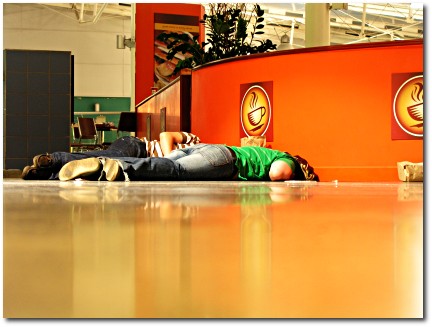 I’m writing this up instead of going to sleep.

Because it was fucking awesome, and I’m not sleepy.

This is a printer-friendly version of the journal entry “Spending the night at a station” from actuality.log. Visit https://emphaticallystatic.org/earlier/spending-the-night-at-a-station/ to read the original entry and follow any responses to it.
« Scottish Highlands
Boomerang »

8 Responses to “Spending the night at a station”