Left work kinda early last evening. It was cold. But I needed a long walk to clear my head and generally get some thinking done. It was actually quite good fun. I ended up getting quite lost in the middle. I hadn’t realized it earlier, because I wasn’t paying particular attention to where I was going, and more importantly, I have less sense of direction than a blind pig normal person. Didn’t panic or any such thing. Just walked around in semi darkness (yes, the sun sets at some 4) arbitrarily. Ended up eventually at this auditorium with a piano concert starting. Stayed for a while. It was very good. Then resumed my think-walking in the cold. It really helped. However, after a rather long time of not dropping anything valuable, I dropped my camera during the walk. And I wasn’t even using or planning to use it. Sheesh. It seems ok.

Got back home rather late. Caught quite a bit of Adult Swim before I slept. There is just something about adult cartoons designed to fake being kids’ cartoons when they really are kids’ cartoons in the first place. Complicatedly sweet.

Today was as usual. The sem is nearing to an end and that pile of work still just sits there. Started on a wee bit today morning, just to stop quite soon. There was this student run breakfast thing, and the general activity and chaos in the usual work lounges killed the newly spawning productivity. Lunch was oddly interesting. Spent it with this student who’s finishing and all reminiscent. Rather enlightening.

And yes, the sun beginning to set early is not always a bad thing. Here is this rather symmetric cloud and moon pattern. It totally reminds me of Pacman. Totally 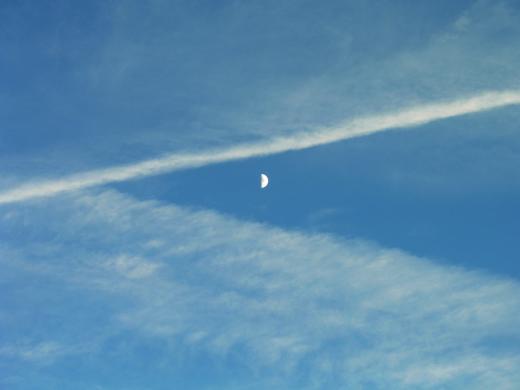 This is a printer-friendly version of the journal entry “Head clearing walks” from actuality.log. Visit https://emphaticallystatic.org/earlier/head-clearing-walks/ to read the original entry and follow any responses to it.
« Fish ups are fished up
Slacker geek Saturday »