Under most normal circumstances, I would have cracked up every single time I heard the woman say it, but I was having a very hard time trying to laugh. 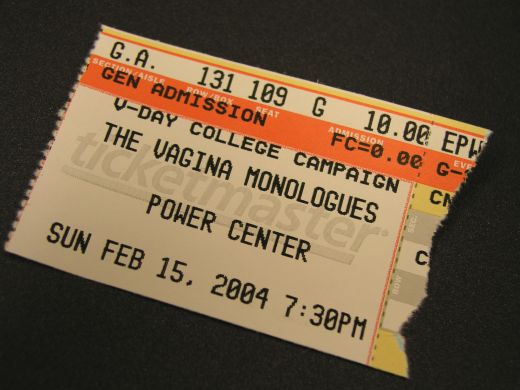 This is about my trip earlier this week to a performance of the vagina monologues. There are a bunch of reasons I didn’t write about this earlier. The biggest being life. Life is messed up, and I’ve never experienced a bigger creativity (or even just enthusiasm) zapper. I’ve just been feeling sluggish and in general, disinterested. The me I was before I morphed for a little while.

It all started a little while ago when I was walking past one of these ticket selling places, and I saw the little pamphlet sized poster for this act. You know, the one with the dominatrix leather boot thing, with the words “Vagina Monologues” on it. Hmm.. talking genitalia? I have to admit I had no clue what I was getting myself into. I am quite the connoisseur of the stand up comic, and for the most part assumed it was “just another show”. A good one, but nothing out of the ordinary. On to that later. So there I was, near the ticket stand and lil miss I’m so cute you have to buy a ticket was there too.

How often are you going to get a chance to use the word vagina in a conversation with a perfect stranger, and use that as humour material getting her to giggle without being slapped? Not too often, I just HAD to. Needless to say, I now had tickets to the show. And not just that, somehow the rest of it seems to be a blur, but I was now also watching Artemesia (the tale of a defiant and provocative woman artist in the 1600s!) and Kill Bill (I could describe it, but “blood”, should about cover it).

Yes, being a guy is kinda like trading brains with an imbecile, only worse. Anyway, on to the show.

Firstly, a good portion of the show wasn’t even a monologue. They weren’t even dialogues. There were so many women on stage during so many parts, even multilogues won’t cut it. And firstly (there are two firstlies, a tie) I’ve never been at a place with 2000 people or whatever with a 1:100 ratio of men to women. It was a good weird.

Initially, it felt just weird. For a long time, I didn’t see a guy. And I mean a really long time. I wasn’t being overly stared at, but I didn’t want to be some weirdo roaming around where I shouldn’t have been or some such. In a little bit, after I counted 3 or so more men, I realized I wouldn’t be stoned or however it is this half of the species deal with intruders. It rather quickly dawned on me (actually, a lot later than a normal person, but saying “quickly” makes me feel smart, and I will stick to quickly) that this wasn’t about comedy at all.

This was a front for educating people about (and attempting to end) violence against women and girls. A very very dark and disturbing theme, yet a noble cause. It was, at points of time a little too much for me to handle. I mean, in my world, the one in my head?, none of such evil exists. It took some convincing to get me to actually try to have a little fun and not puke.

Some stuff was actually quite funny. But you never really could laugh laugh, given the undertone screaming gang rapes, date rapes, genital mutilation, incest, brutality, sex trafficking, … and strangely enough … melted faces. I don’t know if it is the war, but somehow there were a lot of references to melted faces when bombs are dropped. Now, I am as compassionate and understanding as the next person, BUT THAT ISN’T SPECIFIC TO WOMEN. There would have been as many, or probably more men and boys who lost their faces to explosives too. Men don’t have magical flame retardant faces or something.

I originally planned to describe the show itself in g(l)ory(ious) detail, but I’ve chosen a different (and yes, obviously easier) approach. I’ve linked to an MP3 [3.24 MB] for a sneak peek, incase you HAVE TO EXPERIENCE THIS NOW. This was one of the relatively “funny” ones. There was this one hilarious bit involving a woman detailing on stage the different stages and sorts of moaning. Basically, she was up on stage for 20 or so minutes moaning.

My favourite? The college girl moan. “Oh Oh Ooooh, I should be studying, Ohhh oh, but I..forgive me.. ooooh”. Finally, a bit where I was laughing without worrying about the ultra serious messages and facts that were being conveyed. And obviously, the other woman, who kept calling it her coochie snorcher. Like who knew? The clitoris has TWICE the nerve ending concentration as the penis, and its sole purpose is to please the woman. Sheesh. Some halves of the species have all the luck.

(Obligatory, yet moot question. I am not equipped to answer it, but that’s never stopped me before.)
If my vagina could talk what would it say?
Umm… “Good god almighty! I can TALK.”?

I don’t know what it is, but the term vagina warrior keeps conjuring up the image of Xena, the warrior princess in my head. On a more serious note, you probably ought to check out their sites and how to help them if you happen to have this random piggy bank in your heart in which you store all those “I must give back so much to the world today” coins. Now is your chance. Make that huge withdrawal.

And yes, I just have to say it again, coooooochie snorcher.
You know you want to too. Go ahead.

This is a printer-friendly version of the journal entry “The “Coochie snorcher” monologues” from actuality.log. Visit https://emphaticallystatic.org/earlier/the-coochie-snorcher-monologues/ to read the original entry and follow any responses to it.
« Sunsets and things
Insane me »

2 Responses to “The “Coochie snorcher” monologues”